A couple of weeks ago we presented a paper at the Smart City Exhibition 2013 in Bologna, Italy entitled “Citizen monitoring of cohesion policies in southern Italy and the development of civic communities”.  We tried to put our civic monitoring experiments in a context by collecting some relevant literature at the intersection of social capital, public policy and social media and technology.

The paper is in Italian, but you can find an abstract of an earlier version in English and a prezi presentation below.

Social capital is recognized as one of the main determinants of the institutional capacity of local governments which, in turn, can positively influence the impact of development policies and, ultimately, regional socio-economic performances (Woolcock et al., 2000; Quality of Government Institute, 2010; Filippetti and Reggi, 2012).  In particular, the economic backwardness and many unresolved issues in Italy’s Mezzogiorno are often explained by low levels of social engagement (Putnam, 1993; De Blasio e Sestito, 2011). According to Putnam (1993), civic communities – whose vibrancy is crucial in determining regional differences in the Italian landscape – are characterized by a mix of social and political engagement, solidarity, trust and tolerance that gives them the ability to effectively collaborate for shared interests.

Information and Communication Technologies (ICTs) and social media can support the collaborative efforts of the new communities of so-called “civic hackers” (Crabtree, 2007; Bertot et al., 2012), based on the availability of open data from the government. Their ICT tools, political activism and aesthetic views are similar to those of the “urban hacking” movement (Culatti, 2010). In particular, open government data on projects funded by public money can enable new forms of collaboration between citizens and government (Noveck, 2009), through which the “monitorial citizen” assumes a proactive role in assessing the impact of public policy implementation (Schudson, 1998).  Newly launched experiments of citizen monitoring of development policies in southern Italy are expected to strengthen existing civic communities and to create new ones. Furthermore, citizen monitoring can directly influence the quality of policy-making by collecting evidence on how projects are progressing. This evidence can be harnessed by local governments to improve the implementation of current policy and/or to plan new actions.

The paper analyses the initial steps of “Monithon”, an independent, grassroots initiative of citizen monitoring focused on EU and national policies for economic cohesion in Italy. Through this initiative, launched in early 2013, citizens are able to actively engage with the official data from OpenCoesione, an open data portal by the Department for Cohesion of the Italian Ministry of Economic Development. To the best of our knowledge, this is the first time that the principles of civic monitoring are applied to the development policy in Europe. 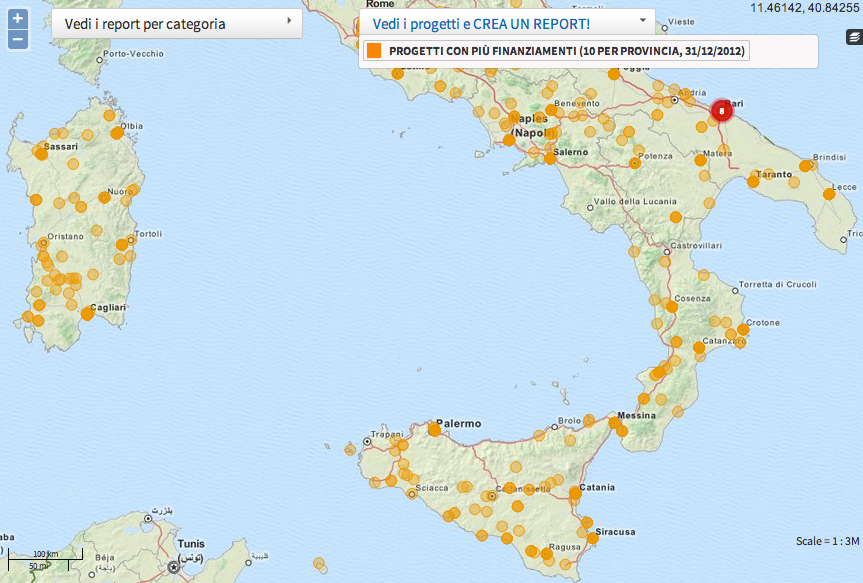 In the last few weeks, some devoted monithoners have reported on how the monithon.eu web  experiment was created. Through the Monithon web platform, the citizen can collect and upload reports, photos, videos and other information on how publicly funded projects in Italy are progressing. The projects that have been monithored during the 2013 Monithon Days are funded by both EU Regional Policy and Italy’s national Cohesion Policy.

The articles and blog posts by Davide Mancino and Cristina Tognaccini – in Italian only – focus on the potential of the platform for civic engagement.
With this brief post on the ePSIplatform, Matteo Brunati introduced the idea behind this initiative: