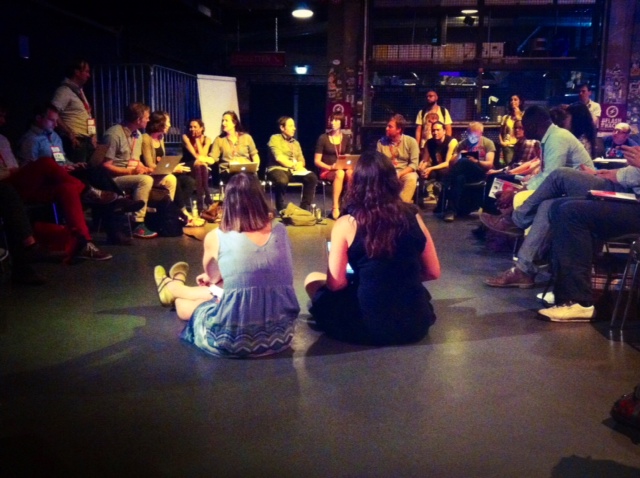 Open Minds to Open Action. We are back from Berlin and learned a lot of good stuff that we are ready to report.as been an intense stream of events and a collective and interactive exploration. Debates, round tables and experimental workshops covered a huge set of topics.  This quote is from the festival’s about page: “Organised by Open Knowledge and owned, in the broadest sense, by the open community, the Festival will bring together over 1,000 people from more than 60 countries to share their skills and experiences; encouraging them to work together to build the very tools and partnerships that will further the power of openness as a positive force for chaWe had the impression of being immersed in a world where “open” is a given rather than an adjective, a pre-condition rather than a goal. This was the leitmotif of every story told, and every person we met. What did we learn? What can we do with open data and Monithon community?

We had the chance to take part in many stimulating sessions and meet interesting people. Many of these have inspired new actions and solutions for our citizen monitoring marathons.
A breathtakingly fast-paced session dealt withd Italy’s improvements withentioned not only ourity anexperiment – which scraped data for 10,000 previously Mafia-owned buildings to enable effective reuse of these assetOpen Budgets”) and e main Italian information system for tracking goverment expenditures.  The Italian context is evolving slowly, with a significant Norths, such the development of the Italian Government’s  More info on this session can be in the notes fro

Not just official sessions. One of the most inspiring encounters we had was the one won initiative based on monitoring the quality of government services such as licence permits. Info on citizens’ rights and government obligations is displayed in plain English on the Bantay portal. However, its purpose is not simply to complain – “Don’t hate, participate!” is its motto. Targeting  high school students, its goal is to collect structured feedback on administrative procedures. “We are firm believers in the feedback loop. Rating on Facebook and Twitter will only get you so far. If we use proper channels for feedback, we have a chance of actually turning these complaints into cases which can later on lead to reform”.  Using the data collected, they compute a “Red Tape Index” for each agency, which includes ratings of compliance, transparency, facilities, process flow etc., with the ultimate goal of identifying malpractice and demanding change. In Italy e light on the public health system”).

Strengthening Monithon method. This great example gave us the opportunity to re-think our method of citizen monitoring.  The session o an additional, nos are used and, in particular, which companies benefited from that funding to supply goods and services. The project Open Contracting has developed a set of guiding principles that include “Participation, Monitoring, and Oversight”.  Even more concretely, this project is developing a global standard in order to publish procurement data which has already yielded some results. In Slovakia, for instance, data were published by the government as early as 2011. The same happened in Nepal and Georgia, where official governmental data (published in PDF format…) were re-published and visualized, with the aim of making them easier to understand and facilitating engagement on the part of the citizenry. In Georgia, thanks to open data on public contracts, it was possible to identify potential cases of corruption or false competition (6% of the total). These are the “golden rules” of the Slovak working group, which was among the first communities to take action: 1. Get the data, 2. Make it as available as possible, 3. Understand the data, 4. Involve people, 5. Take action, 6. Be able to cooperate. The main critical issues of this process are the willingness of governments to provide comprehensive data (e.g. about subcontracting) and, once the data is open, citizen engagement. According to Eva Vozarova of Fair Play Alliance, “Disclosure is just the beginning.”
What about Italy? Tracking financial flows is possible through the CIG, unic code of tender by National Anti-Corruption Authority (ANAC) for tracking financial flows. Its portal has published the database of public procurement, with the chance of searching and downloading open data. Don’t be naive. With these words Beatriz Busaniche (core team member of Creative Commons Argentina and founding member of Wikimedia Argentina) closed her keynote. She stressed the need to improve public participation so that they can truly challenge the existing decision-making mechanisms.

This is precisely what we want to do with the Monithon project, as these are our next steps:

Monithon and OpenCoesione will represent Italy at the OGP Awards!