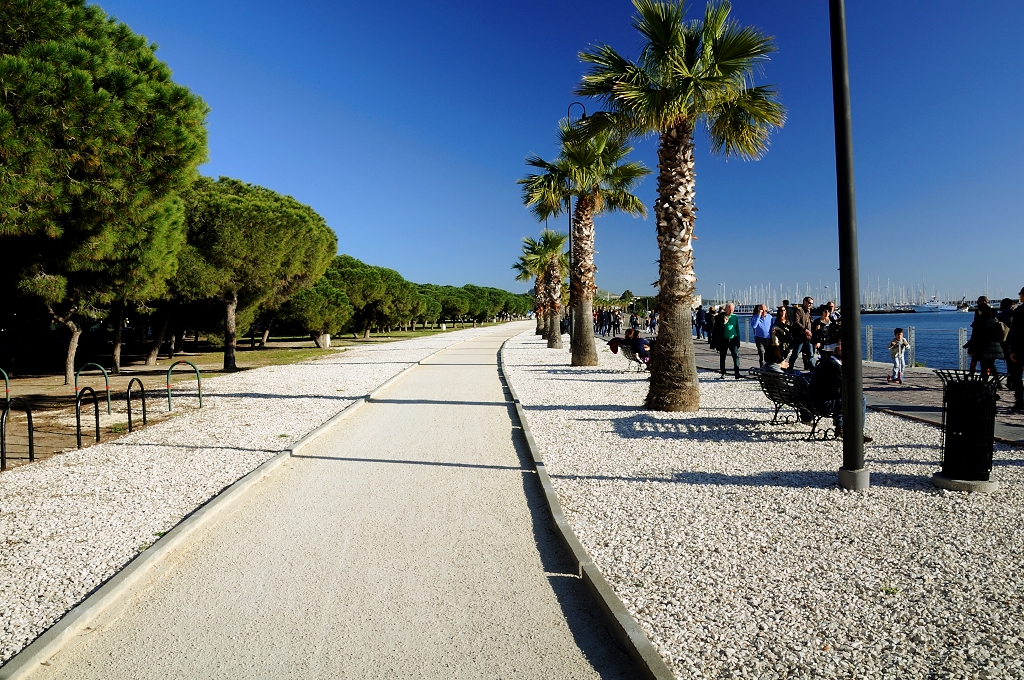 During International Open Data Day on February 22, The Sardinia Open Data association joined the 2014 Monitoring Marathon promoted by monithon.eu and launched a local initiative – a civic walk – to pay a visit to the Su Siccu bike and pedestrian lane in Cagliari that received funding from the European Union.

The aim of this citizen monitoring was to understand the reason why eleven years of work were necessary to build a six hundred and twenty metres cycling/pedestrian path. We did so through on-line and off-line tools as we reported in our citizen monitoring report here on monithon.eu (in Italian).
The connected mapping party we organized – a little walk with GPS and notebooks to take note of thing of interest and localize them on OpenStreetMap – gave us the chance to check in detail every additional service and equipment installed along the path to improve the use of the public area. Su Siccu (from Sardinian language, the dry area along the sea) is a portion of the city cost line, between the dock Molo Ichnusa and the Bonaria shore. Walking along the path you can admire a stunning perspective of the Cagliari’s gulf on one side and the shrine of Bonaria with its majestic staircase on the other side. Behind the path there are small kiosks, called “I ricciai”, where people can buy fresh sea urchins, local bread and white wine.

Until a few years ago this area used to be in poor condition. Now its redevelopment is part of a special program of urban development financed by European Regional Policy, called “Programma integrato per lo sviluppo urbano e la mobilità ciclabile, pedonale e pendolare nell’Area metropolitana di Cagliari” (“Integrated program for urban development and mobility in the Cagliari area”).

The story begins in the 2003 when the city was governed by the mayor Delogu. That year an agreement was signed to demolish a wall that divided the Ichnusa dock and the Garau dock, which was part of a military area managed by the Navy. The wall was dismantled in 2005 and the decision was that it would be used for public benefit. The building of the new path actually started in 2006.
The pavement was refurbished and new service areas were designed to adapt the place to its new function. A wooden sidewalk was built along the “Ammiragliato” building.

Once the first and second part of the path were almost ready, the project stopped. The whole area enclosed couldn’t be accessed until 2012. In that year the construction restarted but unfortunately many damages occurred since the place had been abandoned for six year.

On October 8th 2013 the path was ready, and could be inaugurated. On January 8th 2014 also the wooden walk path was open. After eleven years, the project cycle lane along the sea finally ended and Cagliari inhabitants now can use and enjoy the public area.

Su siccu path is only one piece of a larger project that includes a suggestive itinerary starting from the city centre, continuing along the sea and then leads to the regional park of Molentargius-Saline, a famous wet area, to reach finally the Poetto beach, where another cycling lane is going to be build shortly.

Su Siccu path is not only important from a naturalistic and touristic point of view, but is also crucial for the effectiveness of local mobility. In fact, it is part of a wider project of alternative paths and connections that everyone hope to have available as soon as possible.
Cagliari is rapidly becoming a metropolitan center with an increasing amount of people commuting from the surrounding areas. A more efficient public transport is a frequent demand from citizens that institutions have to handle every day.

During our monitoring we met a lot locals complaining about the delays of the works and the lack of information from the city government.  In their opinion, public money is not used efficiently and it does not make real benefit to the citizens. Sardinia Open Data could hear and witnesses the voice of cyclists, who recognized the that project is now completed and enjoyed the results.  However, they still could not realise why it took such a long time to build this lane and think that the overall investment was too large compared to actual results.

In conclusion, urban redevelopment and local mobility are key component of the future development of the city of Cagliari. This is even more pressing since Cagliari is now candidate to become one of the European Capitals of Culture 2019 and is waiting for the final verdict. Civic awareness is more than needed to build the future in a way that ensure a real participatory process that involves all citizens in key local policy decisions.